On Sunday afternoon, Sunday 23, February 2020, the fifth meeting of the parents’ cycle in the Holy Metropolis of Corfu took place at the Spiritual Centre. It hqd the following topic: ” Suggestions for the modern family” with main speaker the Protopresbyter father Georgios Milkas, theologian, priest in the Holy Church of Evangelistria in Evosmos and priest of the Holy Metroopolis of Neapoli and Stavroupoli, in Thessaloniki.

Father George pointed out that marriage is not charity but a choice of love. There are three loves in marriage, the one for Christ, the one for the spouse and then the love for the children. The enemy of marriage is self-centered arrogance. God helps the couple sharing time and mood. The support of the public for both the husband and wife of the spiritual father is valuable. The right parent is the one who gradually becomes the “useless parent”, that is, he lets the children grow up in freedom and does not become overprotective. The parent is called in to the child’s place, to see how the child thinks and not to identify the child’s needs with their own needs. The burden on the child is often the life his parents did not live. This is why parents need to work on the child’s adulthood.

The speaker concluded by recalling the Thanksgiving lifestyle that the modern family needs, God’s doctrine, love, the decision to come to terms with forgiveness as a basic principle.

A dialogue ensued, and the children of the parents involved were voluntarily employed by the teachers of the ELENI BELLOU Kindergarden School.

THE THIRD MEETING OF THE PARENTS’ SCHOOL OF THE HOLY METROPOLIS

THE THIRD MEETING OF THE PARENTS’ SCHOOL OF THE HOLY METROPOLIS 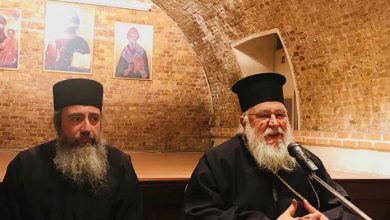 The Pedagogical Principles of the Three Hierarchs