The Metropolitan of Corfu, Paxoi and Diapontian Islands Nektarios travelled in Chicago after the invitation of the Holy Metropolis of Chicago and the Parish of Saint Spyridon, which celebrates 100 years since its establishment.

The Metropolitan of Corfu carried along the holy part of Saint spyridon’s right hand which is kept apart from His relic in Corfu.

Before the beginning of the official events Bishop Nektarios visited the Holy Monastery of Agios Ioannis the Chrisostomos in the borders of Chicago and Wisconsin, where he celebrated the holy vigil as a blessing to the female fraternity headed by the Abbess Melanie. Lots of people participated in the Vigil in the evening of Tuesday, 11th of October 2017, and worshipped the Holy Relic of Saint Spyridon.

Metropolitan ektarios emphasised in his speech that the existance of the monastery is the result of asketical and spiritual efforts of the archimandrite Efraim, who was abbot of the Holy Monastery filotheou in Agion Oros. The monastery provides light to the Ecclesiastical Life of America, not only for the Greeks but also for every other people who seek for Christ and His truth.

Just like saint Spyridon supported the Orthodox Faith in the First Ecumenical Synod among many people, so the monasteries and the parishes promote the spiritual life, the ability to help others and the maintainance of the truth and faith to Christ in a world that has lost its spirituality. Saint Spyridon is a constant help to this fight.

Metropolitan Nektarios expressed his joy for the progress of fraternity, with which he has been spiritually connected for many years and he pointed out his respect and love for the abbot Efraim, who reformed monasticism in America.

Before the Vigil, Metropolitan Nektarios said a memorial (trisagion) for the soul rest of the late Metropolitan of Chicago Jacob, who passed away a few months ago and had asked to be buried in the monastery, just like he did.
The visit continues. 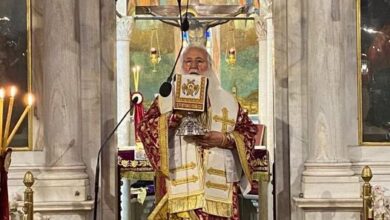 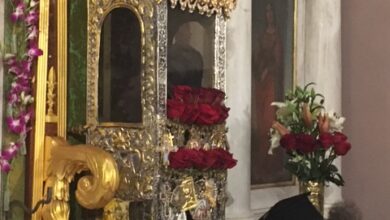